He olivat täällä (They were here) will bring former residents of the Tori Quarters to life. According to Alexander Reichstein, people never truly disappear without a trace: we can still hear words, steps and even breaths taken from long ago. Persons long since dead wander in the garden, meet each other in the drawing room and enjoy fresh air on the balcony.

In UV light, figures bent from wire and sprayed with fluorescent paint will come to life like ghosts. These translucent characters will blend in with their environment and Sofiankatu's surroundings will become part of the work.

As can be seen in his stylised figures, Alexander Reichstein is a trained graphic artist. This work was specially commissioned for Lux Helsinki. 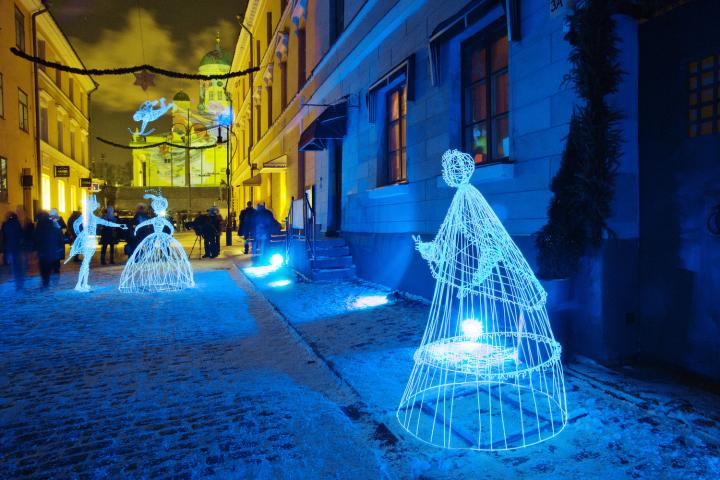 The artist Alexander Reichstein (b. 1957) was born in Moscow, but has lived and worked in Helsinki since 1990. He often creates art for and alongside children. His work includes children's books, sculptures and installations – in addition to which he has designed large, interactive exhibitions for museums. The artist's works have been presented extensively abroad, in countries such as Iceland and Japan. Reichstein's illustrated book Gondwanan lapset was awarded the Finlandia Junior prize in 1997. He won the Children's Culture State Award in 2008.